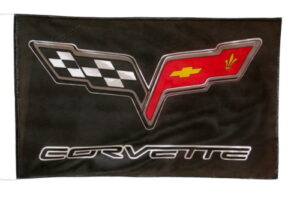 Corvette debuted in January of 1953 as a show car in the GM Motorama. It was a stylish two-seat convertible, designed to show the world that GM could create a sports car to compete with European nameplates like Jaguar and MG. All 1953 Corvettes were Polo White with red interiors.The response to the Motorama show car was overwhelmingly positive, and production began that June in Flint, Michigan. It would change the landscape of the American road forever.

The 1953 Corvettes were built by hand and appeared nearly identical to the Motorama car. They were powered by the existing Chevrolet 235-cu.-in. 6-cylinder engine that was modified with a three-carburetor design and dual exhaust to give it more sports car-like performance. Named the Blue Flame Special, this engine generated 150 horsepower, and it was teamed with a 2-speed Powerglide automatic transmission. This powertrain, however, did not live up to the performance expectations of sports car buyers. Although sales climbed to 3640 units in 1954, they fell off dramatically to just 700 in 1955 setting off rumors that Corvette might be a short-lived automotive experiment. But Zora Arkus-Duntov had different ideas.